Ah yes, the moment has come! For over 16 years the tradition of the passing of Distinguished Service awards has been carried on by our precious government, and it's high time that such an example be adopted by publication agencies. As such, FrillerWorks will help pioneer the path for such a great tradition to be propogated outwards and forthwidth to all places of establishment, no matter how great or meaningless they are. We set forth to do so, by doing so ourselves.

It's time now, finally, to present such an award to recepient of which has been decided by this publication. With careful consideration of the aformentioned examples above, we've looked deep into their spirit and do believe that we do so in similar regard. As there is no one else available to perform the ceremonies, I, the author of this article, on behalf of my self, do hereby present the Water County Department of Publications Medal for Distinguished Authorship Service to the man who has contributed the greatest volume of articles to FrillerWorks, my fellow self: Jawsh McCullaugh. He has clearly deserved such meaningful recognition, and is the perfect man for such distinguishment. Oh yes, just like the real thing, this also is totally not a joke and completely meaningful. 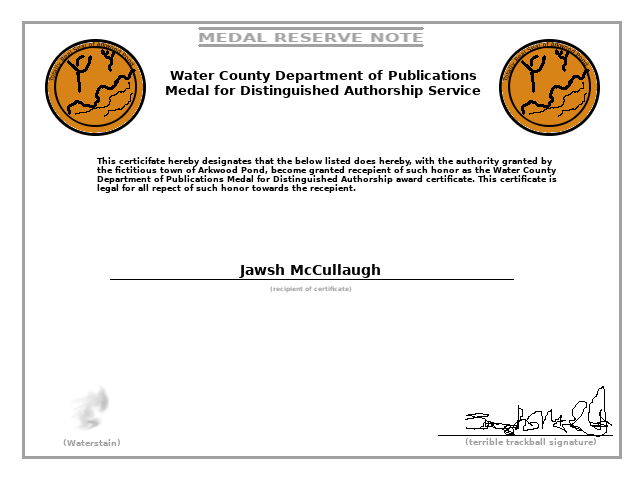 Hey, try reading these too:

At FrillerWorks, we're We don't really know what we're doing

At FrillerWorks, we're Hiding behind curtains while we change our clothes in the office.

The Teaser for Our Favourite Detective's new adventure!

What am I holding back from you?

At FrillerWorks, we're Keeping trash around since the dawn of whole grain toast.

Other Good Sites:
(Not a part of the McCullaugh.com Network)

We got like, the single patty or the double-decker and you can get it with like, the lettuces or the tomatoes or the pickles or the onions, like, we got it all man, we got all the stuff here.

Like, if you want a condiments on it, we got the ketchup, the musturts, the mayonaise, and like, we can put, like, a cheese on it if you want, like pretty much anything dude. We got it.